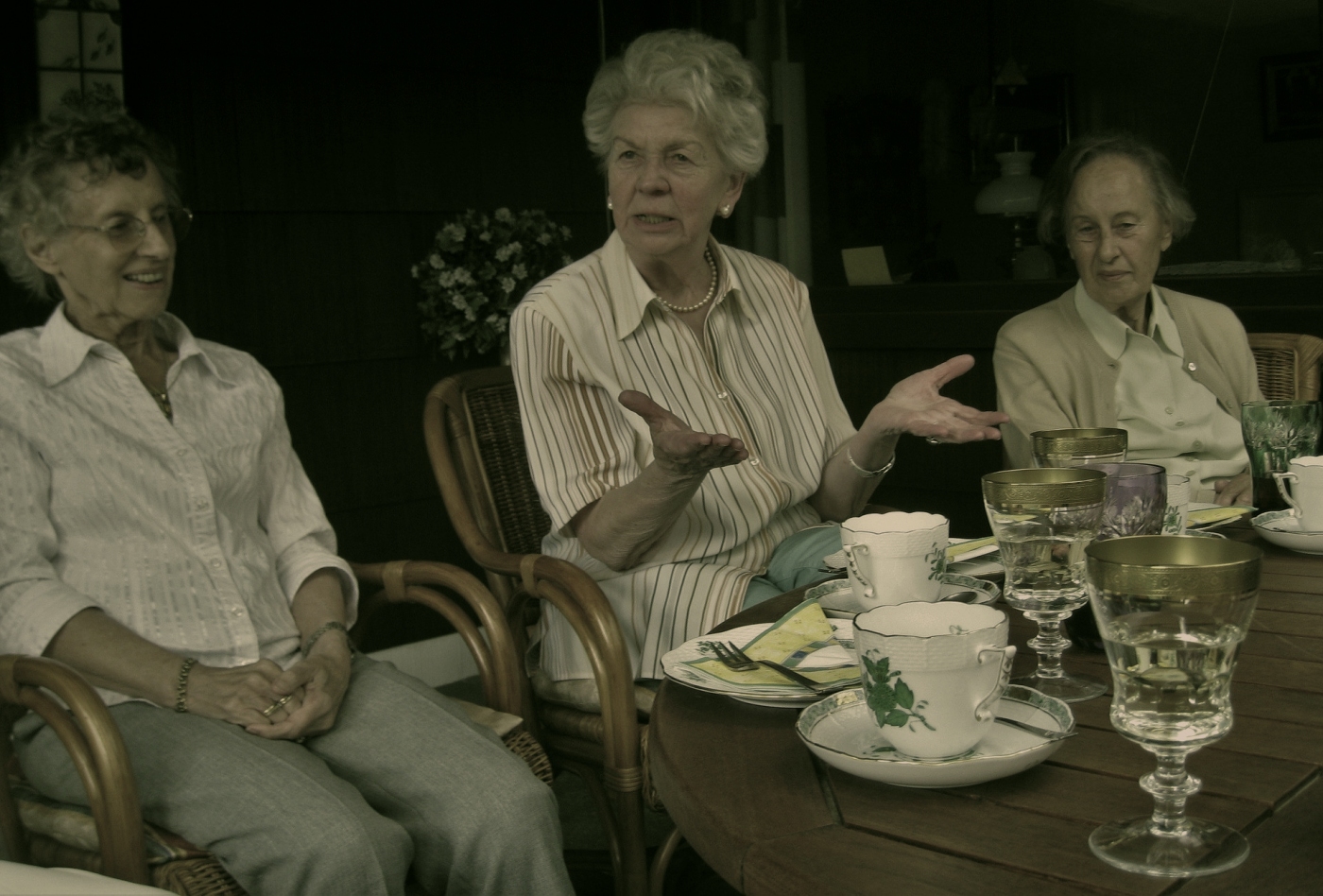 Being a people watcher isn’t always bad. I get the feeling I’ve given off a sour impression the first go around but, I can assure you that my words are not in vain. I watch people and get amused by every second of it, for better or worse. To keep it light and humorous this week, let me share a story of three elderly women leaving a Goodwill.

Now, one wouldn’t think much of three elderly leaving a store but, it’s not what they were that amused me. It was the few short words spoken between the three—or, two of the three, rather—that had me interested in wanting to talk to these women.

I didn’t speak to them but, I had my reasons: I was off the clock for lunch, I don’t like forced palaver (and I doubt the elderly appreciate it either. Their limitation of time is more apparent than our own), and it was raining.

Before I get off-track, let me set the scene:

It had just started raining in this small town when three women—we’ll call them Betty, Annie, and Doris—exited the local goodwill after finding some great bargains on Sunday morning shoes, those kind that Annie wanted to wear especially for the deacon Arnold, having a keen eye for him.

Just as they left the doors, a crack of thunder rolled from the ashen sky, shaking the ground beneath their feet.

“Girls,” Betty remarked, “I think we outta do s’more shoppin’.”

The other two considered each other before looking back and nodding; a shared fear of storms had brought their faces to hold the look of a girl no older than twelve, cowering in fear.

As the trio turned back to the doors, a crack of lightning struck the automated door system, leaving the women outside to face the peril of what was to come: cold water, fogged glasses, and being soaked from your perm to your loafers.

Annie stared in disbelief as the inside of the store became a madhouse of bargain hunters turned shoplifters. Oh the humanity.

“My goodness,” Annie breathed. She turned to see her two dearest friends had left the curb and were already on their way to the car. She looked down, seeing they had already taken their things from the basket, too.

Let me pause the story and say that only the last two paragraphs and the next are true, but there was something in the comradery of this old woman’s voice when she replied to her friend that touched my heart. Some friendships do go deep, and I believe this was one of them. Back to the story.

Doris continued to the car, only stopping briefly to acknowledge that one of her friends hadn’t quite gotten with the program. Betty turned back. She had a determined look in her eye that seemed to speak for itself.

“We’ll come back around and g’itchee,” she said. Her voice had raised an octave,

Doris and Betty dove into the car, disregarding the sounds of their new china crunching together as they threw it to one side of the back seat. Betty reversed the Cadillac de Ville quicker than annulment could a bad marriage in Vegas and spun tires getting back to the curb.

‘It won’t be long now,’ Annie thought. She held her bags closer, wondering what the deacon would do in this situation. “What would Arnold do,” she asked herself.

Betty swerved the corner, rolling down the window, “He’da prolly shit his diaper by now. Get in!” Annie did, tossing her bags alongside the others in the backseat as Betty sped away. Annie didn’t need help shutting her door but, ‘I sure as hell got it,’ she thought. The forward momentum took care of that.

“Slow down before you get us killed,” Annie said. Betty let out a sigh and eased off the accelerator. Annie noticed Doris relaxing a bit in her leather seat. “How’d you hear what I said about the deacon,” Annie asked.

Betty looked in the rearview mirror at Annie and gave an eerily cheerful smile. She looked back at the road, tapping the side of her ear, “Doctor says these babies can pick up a quiet fart from two hun’erd yards away without bustin’ what’s left of my eardrums.”

She was, of course, been talking about her hearing aids. They all gave a hearty laugh.

Something about these old women had been charming and admirable, even if I had only heard a short conversation between them. As I said earlier, I’m amused by every second I get to pay attention to people. I don’t think it’s subconsciously or consciously when it happens but, I enjoy it all the same.

Without the attentiveness to detail, we can’t learn with or from others, and I sure as hell would have never thought up a story like this on my own. So, to Doris, Betty, and Annie, wherever you are, thank you.

One thought on “Confessions of a People Watcher #2: The Elderly Women”